The best new trains and routes of 2022 #news 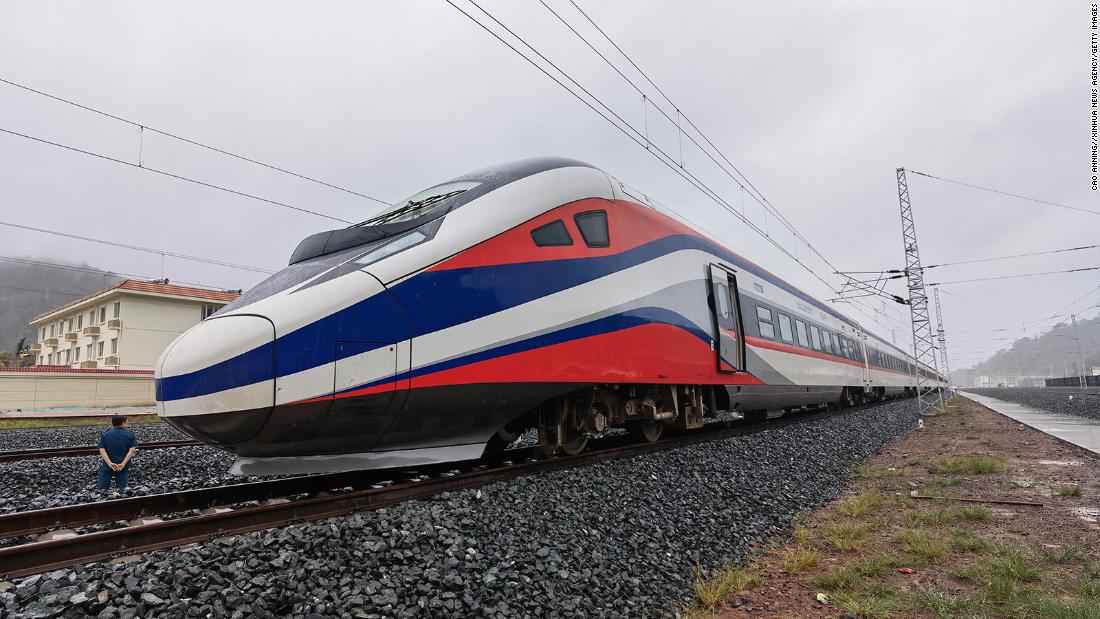 Editor’s Note — Sign up for Unlocking the World, CNN Travel’s weekly newsletter. Get news about destinations opening, inspiration for future adventures, plus the latest in aviation, food and drink, where to stay and other travel developments.

(CNN) — Everyone loves a good train ride, and in 2022 the world did rail fanatics proud with new routes, new operators and a new need for speed across the globe.

From a night train taking you from Austria to the Italian Riviera to the new semi high-speed line across Laos, from a luxurious trans-African odyssey to a new Swiss train that can “jump” rail tracks, and even the United States finally getting the thrill of the tracks, here are some of our favorite moments from the world of train travel.

The new semi high-speed route across Laos is part of a Beijing-Bangkok long-term project.

The big news in Laos this year was the semi high-speed train linking capital Vientiane with Boten, bordering China’s Yunnan province. It runs via top visitor destinations like the karst-studded Vang Vieng, eco-tourism hub Luang Namtha, and Luang Prabang, the beautiful former royal capital. It’s part of a wider plan to link Beijing to Bangkok and even Singapore over the next few decades.

The Elizabeth Line has transformed travel to and across London.

Getting from Heathrow Airport into central London has long been a tiring hour-long Tube journey, an expensive taxi ride, or an equally pricey journey on the Heathrow Express train.

Not anymore — the Elizabeth Line, which opened in May after $25 billion and a four year delay, connects Reading and Heathrow in the west with Abbey Wood in southeast London and Shenfield in Essex, east of the capital.

It’s a quicker, smoother ride, with several stops in London itself. The last station, Bond Street, opened in November, along with through-routes from the west (initially passengers changed at Paddington). The final timetable will be introduced by May 2023.

Iryo is the third company and fourth brand for Spain’s high-speed network.

What’s better than one national high-speed rail network? Three of them. In November, Spain got (kind of) a fourth, with the launch of iryo — a new high-speed competitor owned by major European players including Italian operator Trenitalia, which has brought its popular Frecciarossa trains to the line.

It’s the third operator and the fourth high-speed brand for the country. Iryo is starting with Madrid to Barcelona via Zaragoza and Madrid to Valencia via Cuenca. Connections to Seville, Malaga, Cordoba and Antequera begin March 2023, with Alicante and Albacete in June.

Not a new railway line but a new way to ride the rails — Germany launched the world’s first line to run entirely on hydrogen-powered trains in August. The line, in Bremervörde, Lower Saxony, carries 14 hydrogen trains powered by fuel cell propulsion.

Merged gradually with the existing diesel rolling stock, the hydrogen trains (the Coradia iLint model) were set to be entirely in place by the end of the year.

Italy’s world-class trains have really spread out across Europe this year. Following the December 2021 launch of the Frecciarossa service from Milan to Paris, Trenitalia — lead company of the Polo Passeggeri (passenger hub) of the Gruppo FS, Italy’s publicly owned railways group — launched a domestic French service between Paris and Lyon in April 2022.

Then, before setting up iryo, it headed over to Greece, where it launched Hellenic Train, a new Greek rail operator for passengers and freight. It’s introduced electric trains on the busy Athens-Thessaloniki route — the journey between Greece’s two biggest cities takes just under four hours — and also operates urban and suburban lines around the capital.

Thailand’s ‘floating train’ is a temporary event due to high water levels.

Rising water levels meant that in November, Thai passengers were able to ride along on a “floating” train across one of the country’s biggest reservoirs.

Leaving Bangkok, the train heads into Lop Buri province, where the water has reached the very top of the Pasak Jolasid dam. Thoughtfully, the train even makes a stop once it hits the middle point, so passengers can jump out and snap selfies in this unexpected waterworld. The train is running until February, though by November tickets were already sold out through the New Year.

The new night train from Vienna and Munich takes you to the Italian Riviera and the Cinque Terre (pictured).

A late entry to the list, which launched December 11, ÖBB’s new night train whisks you from the snowy cities of Austria and Germany to the mild Italian Riviera, or vice versa.

Perhaps heading north is more fun — starting from La Spezia (the jumping off point for the Cinque Terre), the train heads north up the coast of Liguria and calls at Genoa and Milan, before heading past Lake Garda to Verona, bidding farewell to Italy at Padova and hitting Austria at Villach. Here it divides into two — one half ticks off Austria and Germany, calling at Salzburg at 6:49 a.m. before arriving at Munich at 9.20 a.m. while the other half stays in Austria, continuing to Vienna.

There was previously a Vienna-Milan night train — the new route extends it beyond the Italian fashion capital.

A night in Scandinavia

Sweden is the home of Europe’s “flight shame” movement, and Swedish operator SJ has capitalized on that with its night train from Stockholm to Hamburg, which started in September under the name EuroNight. Departing around 5.30 p.m. from the Swedish capital, it has a long stop at Malmö before heading through Denmark, arriving in Hamburg before 7 a.m.

Amtrak’s new Acela trains will debut in 2023 on the Northeast Corridor.

Let’s be honest — the US is way behind much of the world when it comes to train travel, so increasing the speed on a popular stretch is big news.

In June, Amtrak’s infrastructure upgrades meant that its Acela trains can now run at speeds of up to 150 miles per hour in the relevant New Jersey section of the Northeast Corridor. Sure, that section is just 16 miles long, between New Brunswick and South Brunswick, but it’s a fine start.

In 2023, also on the Northeast Corridor, Amtrak will debut next-generation Acela trains that are capable of speeds of up to 160mph, to replace older rolling stock.

One for those with time and money to spare: in July, Rovos Rail launched its new route, the Copper Trail, slicing through four countries of sub-Saharan Africa and covering nearly 2,000 miles on a hyper-lux train.

Starting at Victoria Falls in Zimbabwe, the 15-day luxury trip heads north through Zambia, then curls west through the DCR to Angola, where it ends at Lobito, on the Atlantic coast.

In between are day trips to national parks, an elephant sanctuary, and walking tours of towns and cities, including Huambo, Angola’s second city. It is, of course, as breathtakingly expensive as it is beautiful — prices for 2023 start at $13,600.

Invitees and journalists attend the presentation of the new SNCF’s TGV “M” next generation high-speed train at the Alstom plant in La Rochelle, western France, on September 9, 2022.

Made by manufacturer Alstom, the double-decker train with a longer, more aerodynamic nose, will premiere on the Paris network in 2024, before rolling out across the country. The trains are bigger, with better accessibility for passengers with disabilities.