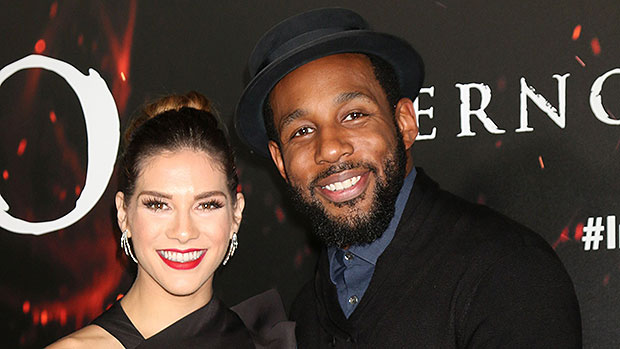 Stephen “tWitch” Boss died by suicide on Tuesday, Dec. 13, 2022 at the age of 40, shocking his fans. The dancer and DJ rose to fame in the early aughts as a contestant on MTV’s The Wade Robson Project and then was the runner-up on Star Search. His fame exploded after becoming a runner-up on So You Think You Can Dance in 2008. He went on to judge the show in 2018 and 2022. Stephen didn’t just like dancing to beats — he created them. The Alabama native was also known for being the DJ on The Ellen DeGeneres Show between 2014 and 2022, and was promoted to be an executive producer in 2020.

Stephen’s wife, Allison Holker, 34, confirmed the news of the beloved media personality’s death on Wednesday, Dec. 13. “It is with the heaviest of hearts that I have to share my husband Stephen has left us,” she said in a statement. “Stephen lit up every room he stepped into. He valued family, friends, and community above all else and leading with love and light was everything to him. He was the backbone of our family, the best husband and father, and an inspiration to his fans.”

“To say he left a legacy would be an understatement,” she continued, “and his positive impact will continue to be felt. I am certain there won’t be a day that goes by that we won’t honor his memory. We ask for privacy during this difficult time for myself and especially for our three children. Stephen, we love you, we miss you, and I will always save the last dance for you.”

Stephen and Allison had been together for nearly 10 years and to many fans, had a picture-perfect love story. Learn about their marriage and their three beautiful children below.

How Stephen and Alison Met

Allison, a contemporary dancer, competed on So You Think You Can Dance in 2006 and finished in the top eight, and as mentioned above, Stephen was a semi-finalist on the hit Fox series two years later. That same year, Allison welcomed her first and only child with her then-fiancé, a daughter named Weslie. In 2010, both Stephen and the then-mother of one were invited onto the show as all-stars to dance alongside the season’s top performers. Allison was instantly intrigued by Stephen.

“I didn’t just make one move — I made, like, 10 moves and he wasn’t seeing them, so I had to put myself out there even more,” she recalled to Dance Spirit in 2012. “From the first week of SYTYCD as All-Stars, I thought he was the cutest guy ever. His personality was so fun.”

According to Stephen, though, he and Allison met a few years prior at a party thrown by Season 2 contestant Ivan Koumaev. “We met there for the first time, but Allison doesn’t remember,” he claimed to Dance Spirit. “We met again during Season 7, but didn’t say a word to each other the whole season. So that’s why I had no idea, because she wouldn’t talk to me and I thought she wasn’t interested.” Stephen then revealed Allison caught him checking her out “in the hallway once.”

During the summer of 2010, both talented dancers were at the premiere of Step Up 3D, as Stephen was a dancer in the film and the So You Think You Can Dance cast came to support him. While the pair admitted they did not interact at the event, Allison decided she couldn’t hold back her interest in Stephen any longer. “So then I got his number and texted that I was proud of him and that he looked great that night,” she admitted.

The pair were reunited at the So You Think You Can Dance wrap party later that year and timing could not have been more perfect. “We shared a dance at the wrap party of that season of So You Think You Can Dance and we have been together ever since,” Stephen gushed PEOPLE in 2018. Allison added, “There was no dialogue, there was no conversation or a first hangout. Literally, we danced and we were together holding hands the very next day. And we never looked back.”

Stephen and Allison Get Married

The dynamic duo got engaged in June 2013 and walked down the aisle on Dec. 10, 2013, at Nigel Lythgoe’s Villa San Juliette Vineyard and Winery in Paso Robles, Calif. The sweet couple surprised guests by performing a self-choreographed dance to Justin Bieber‘s hit “Somebody to Love” and included Allison’s daughter Weslie. Their formal first dance, though, was set to Adele’s “One & Only.”

Shopping for your friends and family for the holidays has never been easier. At @dickssportinggoods , you can get something for everyone (including yourself!). We know you can’t go wrong with a new matching set from our collection with DSG, DSG X TWITCH + ALLISON like the ones we are wearing in our partner challenge. You should definitely add these pieces to your wishlist! Drop someone a hint by tagging them below. #DSGPartner

On the outside, their marriage appeared to be full of pure love and bliss. They were also shame-free when it came to very public displays of affection. For instance, in 2019, Allison bought her hubby an advertisement on a bus bench in North Hollywood that he would see every day on his way to work on Ellen. “Honestly when thinking of the perfect gift for your birthday, I wanted to do something fun, playful and goofy,” Allison wrote in the caption of her birthday post for Stephen alongside a video of the unique gift.

“You make our family laugh and smile everyday and I wanted a gift that showed the kind of love our family shares so it only seemed right! A bus stop bench,” she continued. “I hope that every time you pass this your reminded of our love and giggle a little. So happy birthday Stephen enjoy your bus stop bench ad! LOVE YOU SO MUCH!”

In March 2021, Stephen opened up about how dance continued to play an important role in his relationship with Allison. “People always ask about our relationship. We have dance, and that is like our home,” he told Entertainment Tonight. “When we dance, we can always reconnect and find each other in those moments. So I think it’s something that we really share as a couple, that honestly is just like a dream to me.”

Later on in the interview, he revealed what else makes their marriage work: quality time. “Whether it’s outside dancing or cooking a meal, or even just sitting down, you know, watching something with our kids, we do a lot together, we actually do like each other,” he explained. He also said that being a TikTok famous couple was easy for them because they were already dancing together before they shared their life on the app.

Just days before Stephen’s death, the pair celebrated their anniversary. “It’s our 9th anniversary!! I couldn’t be more grateful to celebrate this perfect magical day!!! Saying YES to @sir_twitch_alot has been one of the best decisions I have ever made in my life!!” Allison gushed alongside a slideshow of their wedding photos. “I feel so blessed and loved!! I love you baby and I will never take you or OUR love for granted! I LOVE YOU.”

As noted above, Stephen adopted Allison’s now 14-year-old daughter Weslie when they got married. They then welcomed their first baby together in 2016, a son named Maddox. Allison and Stephen welcomed their third child, a daughter named Zaia, in 2019. The family was very active on social media together, whether it was through showing off their Halloween costumes, promoting the latest children’s toy, or simply having a dance party.

In addition to dancing, Stephen loved being a father and gushed about his family life in a 2021 interview. “We all just naturally have a good time. Is it tiring? Absolutely. Are you constantly tired? Of course,” he told E! News. “God willing, our kids grow up happy and healthy and all that and we’ve got them for, what, 18 years? And in the grand scheme of that, that’s not that long.”