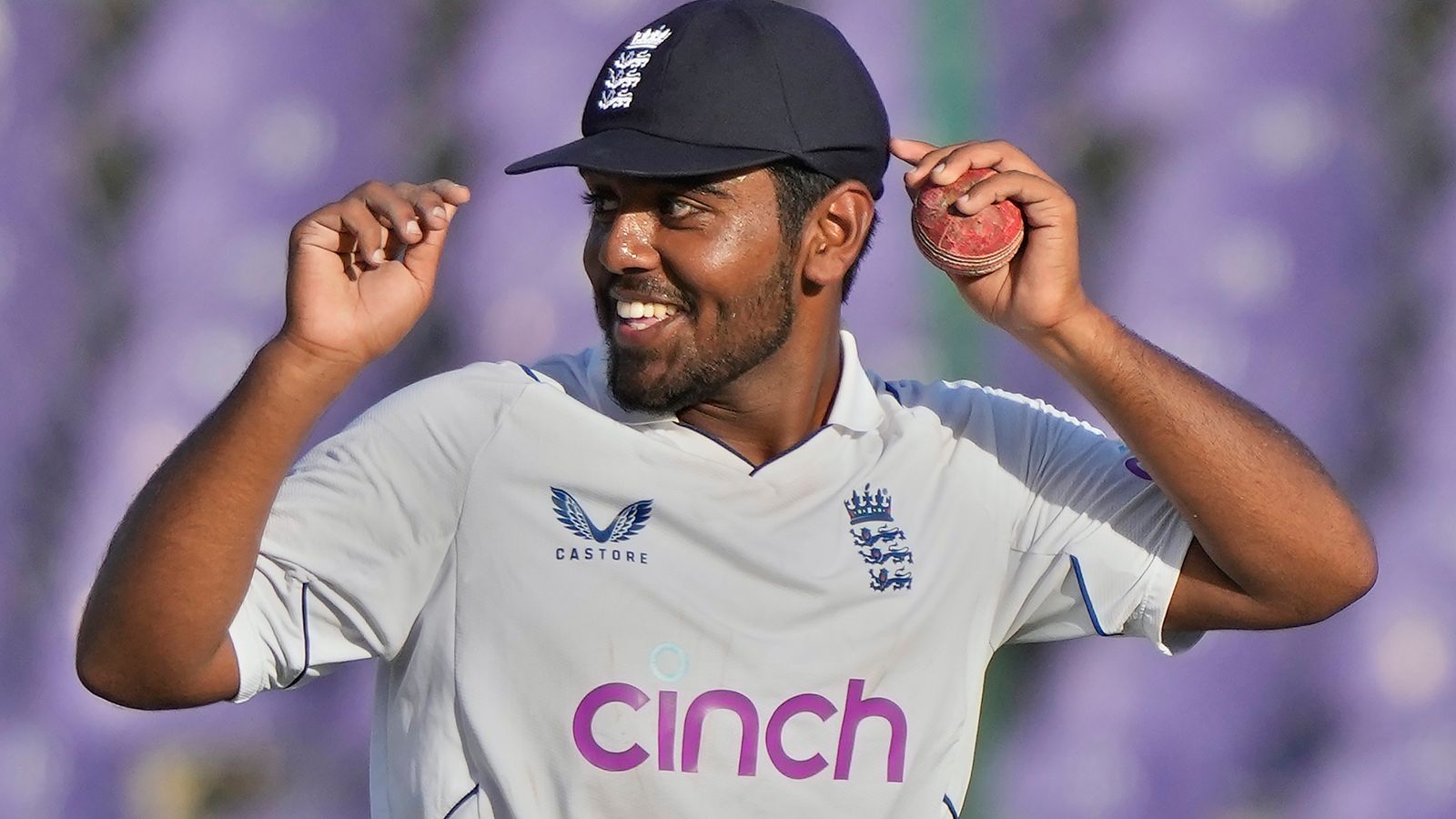 Rehan Ahmed became the youngest men’s bowler to take a five-for on Test debut as England closed in on a series whitewash over Pakistan on the third day of the final Test.

After Jack Leach took three wickets in the first session, Ahmed turned the game on its head and finished with figures of 5-48 as he ripped through Pakistan’s middle and lower order.

His spell meant England needed 167 to win and for a short spell the tourists looked on course to complete the victory inside three days as Zak Crawley (41) and Ben Duckett sped towards the target.

But bad light intervened and England – 112-2 at close – will have to come back on Tuesday, needing just 55 runs to win with Duckett (50) and Ben Stokes (10) returning to the crease.

But 18-year-old Ahmed was brought into the attack late during the second session and took three quick wickets to reduce the hosts to 177-6 at tea – a lead of 128 runs.

He broke Pakistan’s fourth-wicket stand when he dismissed Babar, who had just brought up his half century.

The Pakistan captain was trying to punish a loose short delivery but ended up smashing the ball straight at Ollie Pope at midwicket.

Mohammad Rizwan (7), who had just survived being dropped by Zak Crawley for seven, was caught behind to give Ahmed his second scalp.

Shakeel then departed for 53, sweeping to Jack Leach at square leg to give Ahmed his fifth wicket of the match, leaving his father in tears in the crowd.

After tea, Joe Root had Fahim Ashraf caught behind for one and Mark Wood took Nauman Ali’s wicket, with an lbw that was originally given not out by the on field umpire.

Ahmed then took the final two wickets, with Muhammad Wasim (2) and Agha Salman (21) both caught as they tried to add to Pakistan’s lead.

Crawley was trapped lbw while attempting a sweep and Rehan Ahmed (10), promoted up the order, hit two boundaries before he swiped and got clean bowled.

Ben Stokes tries to mow Nauman Ali over the leg-side but loses grip of his bat and launches it up into the air, nearly taking out the umpire at square leg!

In the morning session, it was Leach who made the inroads for the tourists, taking three wickets in six balls.

Pakistan looked to move the scoring on quickly at the start of the day, with a four off the first ball and 12 from the opening over, but were soon forced to go more defensive after Leach struck.

His first wicket was Shan Masood (24), who was bowled by the spinner attempting to reverse sweep a delivery and was out for 24.

Pakistan batter Azhar Ali was given a guard of honour by team-mates after his final Test innings, with the 37-year-old bowled by Jack Leach in Karachi.

The wicket brought Azhar Ali to the crease for his final innings in Test cricket.

The 37-year-old’s appearance was short-lived as he was bowled by Leach for a four-ball duck and left the field to a guard of honour.

Leach soon added another scalp to his tally, trapping Abdullah Shafique lbw for 26.

Leach’s three wickets came without a run being scored and saw him overtake South Africa’s Kagiso Rabada the leading Test wicket-taker in 2022.

Ahmed: I was loving it out there

As well as taking five wickets, Ahmed hit 10 runs from eight after being promoted to number three in the batting order.

Speaking to Sky Sports Cricket after stumps, the teenager said: “From not bowling in the first session to taking five wickets is a dream come true.

“I was loving it out there any way, but it was nice to get the ball after three hours. I was warming up for three hours.

“I’ll take it. You bowl better balls and don’t get wickets, so to get him is great. I have been working on my leg-spinner [which dismissed Rizwan] for the last two months so it was nice to get that through.

“The instructions with the bat were, ‘try and finish it tonight.’ I think if we had faced another seven overs out there, it would have been quite easy. I should have played straight.

“If we [win 3-0] I think it will be one of the biggest achievements. To come out here in their home and do them 3-0 is massive.”

Watch day four of the third Test between Pakistan and England, in Karachi, live on Sky Sports Cricket from 4.45am on Monday.