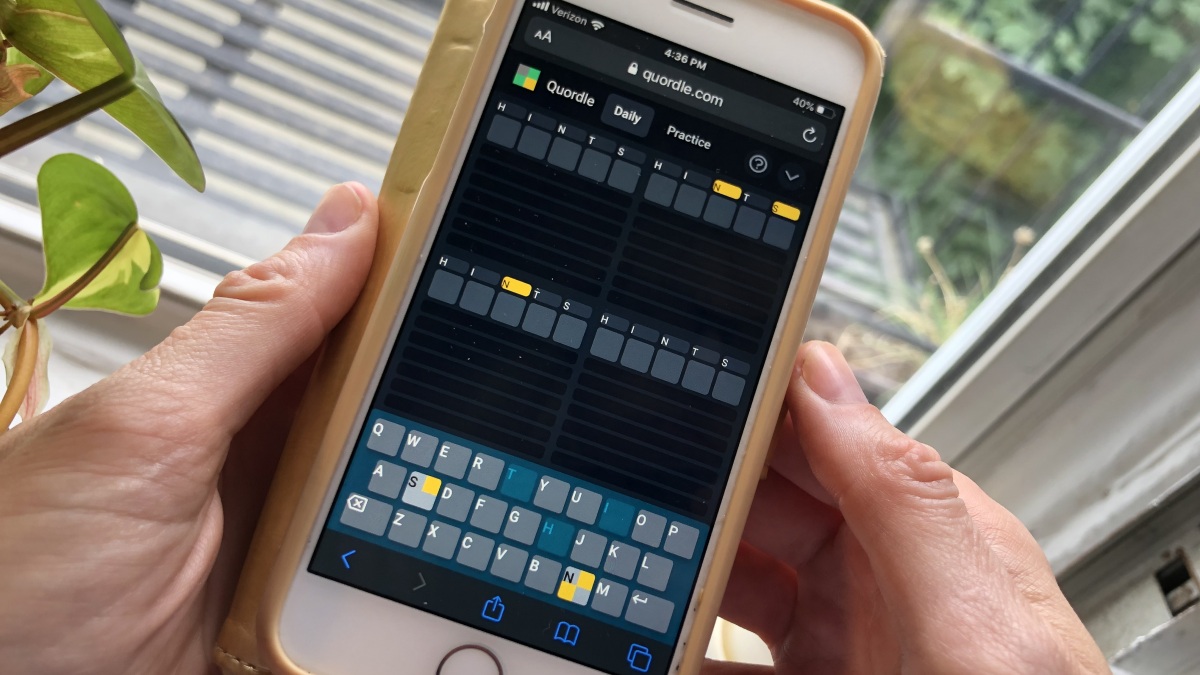 If Quordle is a little too challenging today, you’ve come to the right place for hints. There aren’t just hints here, but the whole Quordle solution. Scroll to the bottom of this page, and there it is. But are you sure you need all four answers? Maybe you just need a strategy guide. Either way, scroll down, and you’ll get what you need.

Quordle is a five-letter word guessing game similar to Wordle, except each guess applies letters to four words at the same time. You get nine guesses instead of six to correctly guess all four words. It looks like playing four Wordle games at the same time, and that is essentially what it is. But it’s not nearly as intimidating as it sounds.

Is Quordle harder than Wordle?

Yes, though not diabolically so.

Where did Quordle come from?

Amid the Wordle boom of late 2021 and early 2022, when everyone was learning to love free, in-browser, once-a-day word guessing games, creator Freddie Meyer says he took inspiration from one of the first big Wordle variations, Dordle — the one where you essentially play two Wordles at once. He took things up a notch, and released Quordle on January 30. Meyer’s creation was covered in The Guardian six days later, and now, according to Meyer, it attracts millions of daily users. Today, Meyer earns modest revenue from Patreon, where dedicated Quordle fans can donate to keep their favorite puzzle game running.

How is Quordle pronounced?

“Kwordle.” It should rhyme with “Wordle,” and definitely should not be pronounced exactly like “curdle.”

Is Quordle strategy different from Wordle?

Your starting strategy should be the same as with Wordle. In fact, if you have a favorite Wordle opening word, there’s no reason to change that here. We suggest something rich in vowels, featuring common letters like C, R, and N. But you do you.

After your first guess, however, you’ll notice things getting out of control if you play Quordle exactly like Wordle.

What should I do in Quordle that I don’t do in Wordle?

Solving a Wordle puzzle can famously come down to a series of single letter-change variations. If you’ve narrowed it down to “-IGHT,” you could guess “MIGHT” “NIGHT” “LIGHT” and “SIGHT” and one of those will probably be the solution — though this is also a famous way to end up losing in Wordle, particularly if you play on “hard mode.” In Quordle, however, this sort of single-letter winnowing is a deadly trap, and it hints at the important strategic difference between Wordle and Quordle: In Quordle, you can’t afford to waste guesses unless you’re eliminating as many letters as possible at all times.

Guessing a completely random word that you already know isn’t the solution, just to eliminate three or four possible letters you haven’t tried yet, is thought of as a desperate, latch-ditch move in Wordle. In Quordle, however, it’s a normal part of the player’s strategic toolset.

Is there a way to get the answer faster?

In my experience Quordle can be a slow game, sometimes dragging out longer than it would take to play Wordle four times. But a sort of blunt-force guessing approach can speed things up. The following strategy also works with Wordle if you only want the solution, and don’t care about having the fewest possible guesses:

Try starting with a series of words that puts all the vowels (including Y) on the board, along with some other common letters. We’ve had good luck with the three words: “NOTES,” “ACRID,” and “LUMPY.” YouTuber DougMansLand suggests four words: “CANOE,” “SKIRT,” “PLUMB,” and “FUDGY.”

Most of the alphabet is now eliminated, and you’ll only have the ability to make one or two wrong guesses if you use this strategy. But in most cases you’ll have all the information you need to guess the remaining words without any wrong guesses.

If strategy isn’t helping, and you’re still stumped, here are some hints:

Are there any double or triple letters in today’s Quordle words?

Are any rare letters being used in today’s Quordle like Q or Z?

What do today’s Quordle words start with?

What are the answers for today’s Quordle?

Are you sure you want to know?

There’s still time to turn back.

OK, you asked for it. The answers are: