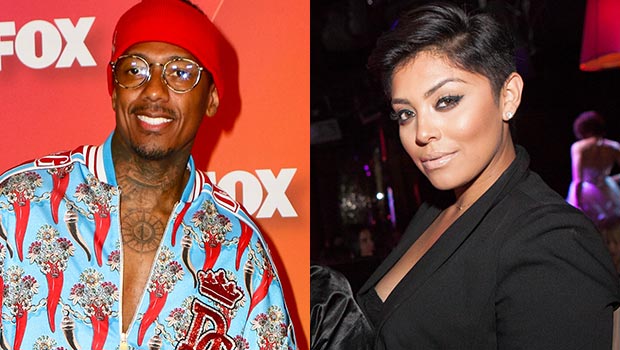 Nick Cannon and Abby De La Rosa got into the holiday spirit on Wednesday by taking all three of their kids to an immersive The Nutcracker exhibit! Abby, 32, shared some snippets of their family fun day on her Instagram Story (seen here) on Dec. 22, which gave a glimpse of her and Nick’s 18-month told twins Zion and Zillion and their newborn daughter, Beautiful Zeppelin, who was born in November. “Yesterday’s holiday adventure was epic,” she wrote in the first video she shared, which showed the happy family walking through an asymmetric blue hallway with gold trim.

Her next video panned around the entire room, which housed giant screens that played different scenes from the iconic ballet. “We were completely immersed in the classics (sic) holiday tale – ‘The Nutcracker’,” she wrote over the slide. While one may assume Nick, 42, would want to rent the place out to protect his privacy, the experience appeared to be full of visitors who didn’t even notice they were in the presence of one of the most controversial fathers in current history.

Abby was also pleased to announce that Zion and Zillion thoroughly enjoyed the outing with a video of Zillion, who she adoringly nicknamed “Zilly”, wandering around the room. He looked like he was having a blast as he did his best to navigate the excitement while wearing blue pants and a white and blue striped shirt. He met up with his brother, who donned the same attire, at the end of the video. “The boys were in awe of all the moving shapes and colors,” Abby wrote.

The final video showed Abby and Nick taking a breather and sitting down with a kid on each of their laps. Beautiful remained in her stroller. The video appeared to be taken by Abby’s sister, Estella, who was tagged in the bottom portion of the screen. The mother of three signed off by giving the immersive experience a perfect 10-out-of-10 rating.

Abby gave birth to Nick’s 11th and most recent child, but he is expecting one more with Alyssa Scott as of this writing. Alyssa and Nick welcomed a boy named Zen in 2021, but sadly lost him in December of that year at 5 months old due to a brain tumor.

Nick Cannon’s 12 Kids: Everything To Know About His Children, Including Those He’s Expecting