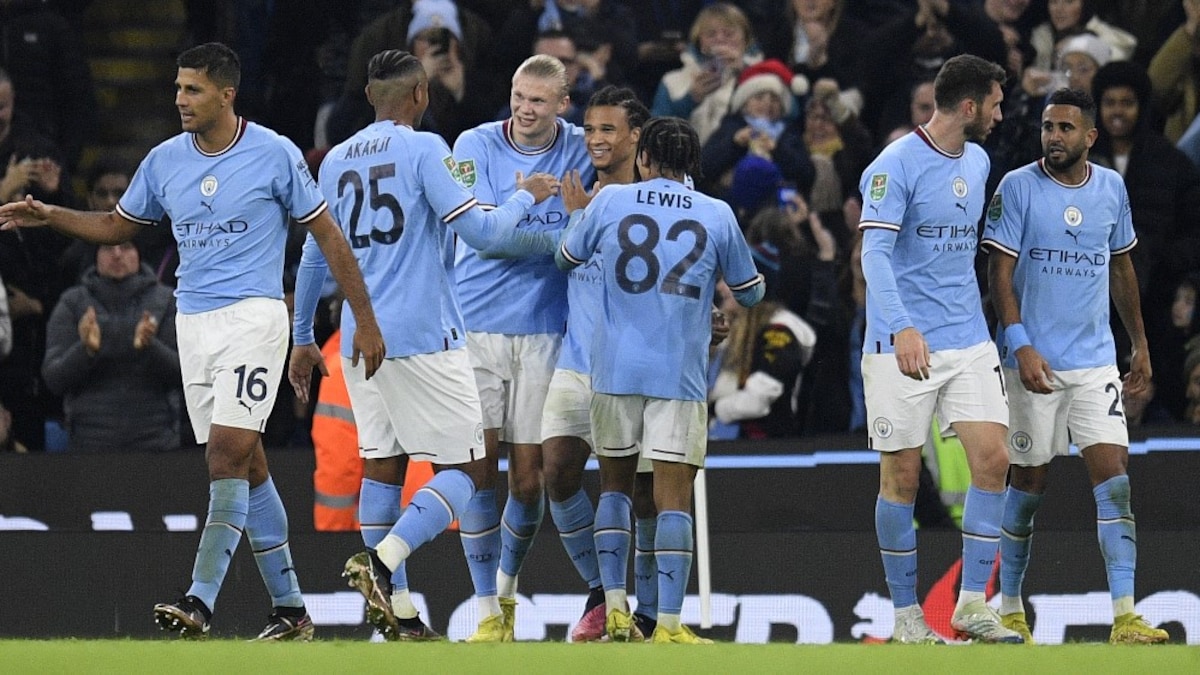 Nathan Ake’s header proved decisive as Manchester City knocked holders Liverpool out of the League Cup in a dramatic 3-2 win at the Etihad Stadium on Thursday. This last-16 clash marked the return to competitive action of two of English football’s heavyweights following the World Cup break with City’s Kevin De Bruyne the outstanding player in a high-class field. Premier League champions City twice led through Erling Haaland and Riyad Mahrez, only for Liverpool to waste little time in drawing level thanks to goals from Fabio Carvalho and Mohamed Saleh.

But after Ake made it 3-2 shortly before the hour mark, the visitors were unable to fashion a third equaliser.

“After the World Cup and a long time of not playing, both teams were incredible with high level and intensity,” City manager Pep Guardiola told Sky Sports.

“Liverpool are so difficult, when they play good they destroy you.”

He added: “Kevin played with a fire inside of him. He had to find it. What a player. How many years he’s been coming here? Eight years? He’s an absolute legend.”

Liverpool manager Jurgen Klopp had no qualms in saying City are a “super, super, super side who do things extremely well,” but still lamented his team’s defending.

“The goals we conceded were completely unnecessary…We played a good game but not good enough to beat City tonight.

“There’s a lot we can build on and we can take into the next games and that’s what we’ll do.”

Liverpool boss Jurgen Klopp, whose side pipped Chelsea 11-10 in a marathon penalty shoot-out at Wembley in February as the Reds won the League Cup for a record ninth time, also named a strong side.

The German’s forward line included Salah, making his first appearance in the League Cup outside of finals since October 2020, Darwin Nunez and Carvalho.

Haaland and Cole Palmer both missed the target when well-placed to score early on but it was not long before the Norway star made amends.

Haaland, seemingly given a free run against Liverpool’s defence, turned in De Bruyne’s near-post cross in the 10th minute after getting in front of Joe Gomez to score his 24th goal of the season.

Liverpool, however, were level within 10 minutes when Carvalho finished from a James Milner cross after the former City midfielder was allowed too much room in the penalty area.

The visitors made two changes at half-time, Fabinho and Alex Oxlade-Chamberlain coming on for novice midfielder Stefan Bajcetic and Carvalho.

But Liverpool fell behind again before either of the two substitutes could get into the game.

Only 76 seconds into the second half Mahrez fired home from the right side of the penalty area following a cross by Rodri.

City’s lead, however, evaporated just over a minute later as Nunez sprinted past Laporte down the left, with Salah making light of a mediocre centre to draw Liverpool level at 2-2.

But a rollercoaster contest then saw City go ahead for the third time when, after a quickly-taken corner, Ake powered in a 58th-minute header from a superb pinpoint cross by the outstanding De Bruyne.

Oxlade-Chamberlain went down in the penalty after a collision with Ake in the 69th minute but David Coote denied the Reds a spot-kick and, with VAR not in use, the referee’s decision stood.

Liverpool, however, had an excellent chance to make it 3-3 when a superb ball from Naby Keita left the onside Nunez free down the right touchline.

But after sprinting clear of the City defence, Nunez, albeit from an acute angle, pulled his shot wide of the far post.