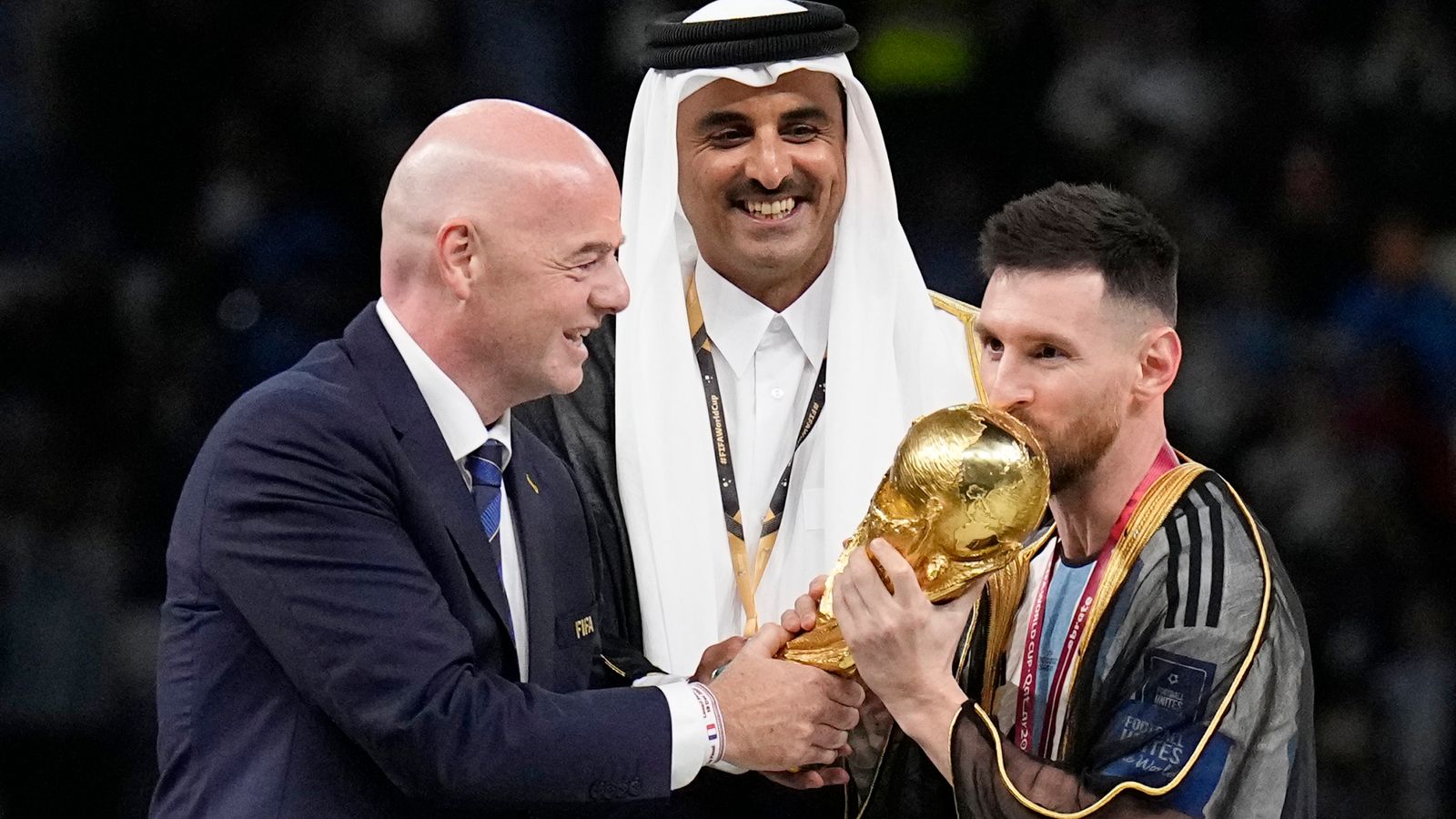 Lionel Messi was presented with a bisht – a traditional Arab cloak – that covered the majority of his Argentina shirt as he lifted the World Cup trophy following his country’s dramatic victory over France in the final.

Messi – who scored Argentina’s first and third goals as they drew 3-3 with France after extra time before defeating them on penalties – had the cloak draped over his jersey by Gianni Infantino, the FIFA president, and Sheikh Tamim bin Hamad Al Thani, the Emir of Qatar.

The forward – who plays for Qatari-owned Paris Saint-Germain and is an ambassador for Saudi Arabia – was then led towards his team-mates by the pair before lifting the trophy while wearing the bisht, which is a status garment worn on special occasions by Arab men and is often associated with royalty.

Former Argentina defender Pablo Zabaleta was unhappy with the position Messi was placed in. Speaking in his role as a pundit on the BBC, he said: “Just why? No reason to do that.”

Former England striker Gary Lineker added: “It seems a shame, in a way, that they’ve covered up Messi in his Argentina shirt.”

Also speaking to the BBC, Alan Shearer joked about the close attention Infantino was paying towards Messi before handing him the trophy, saying: “I didn’t think Infantino was going to let him go either.”

Lineker then joked: “Nobody marked him that tightly during the game.

“He is good in tight spaces though, so he got away from him in the end.”

‘We should be careful before jumping to conclusions’

“It was something we haven’t seen at a World Cup final before. When the captain receives the World Cup trophy, it is a defining image – it’s a picture that lasts forever.

“Normally when the captain receives the trophy, of course he’s wearing his country’s shirt – and the Argentina shirt is one of the most famous in world football. Except tonight, when Lionel Messi got his hands on that trophy, he was wearing a ceremonial Arab robe called a bisht.

“Some people have reacted to that saying it’s a sign the Qataris are trying to own this moment. Whenever anybody sees this picture, they will remember this was an Arab World Cup and it was held in Qatar. A lot of people are critics and say the Qataris staged it during the ceremony.

Lionel Messi danced with the World Cup trophy on the table as Argentina celebrated their win in the dressing room.

“But some people are saying: ‘Hang on a minute – there’s nothing controversial about this.’ Messi was given this robe. He wore the robe and it was his decision to wear it. He’s in an Arab country and it’s a great honour to be given that robe to wear.

“I think we should be careful before jumping to conclusions. It’s for Messi himself to decide what he wants to do when he’s handed the trophy and if he was happy to do that, who are we to criticise him?”

Dr Mustafa Baig – a lecturer in Islamic Studies at the University of Exeter – has explained why the Emir of Qatar put a bisht around the shoulders of Messi.

Dr Baig says the bisht is a formal robe worn by royalty, dignitaries, grooms on their wedding day, and graduates at graduation ceremonies.

“Only a select few people would actually wear the bisht,” he told Press Association. “They basically honoured him (Messi) by putting it over his shoulders.

“It’s like a mark of honour, and just kind of a cultural welcoming and a cultural acceptance.”

Dr Baig said it is also representative of Qatar’s national dress – but only at important occasions.

“This is a top occasion,” he said. “I mean, there’s probably no bigger occasion, so they put it on him as a mark of honour.”

Dr Baig also said he saw it as “an embrace by Messi of the local culture”, adding that it was “a pretty cool thing” for Qatar to do and “smart thinking” on their behalf.

No, the Pro Bowl was not a test run for the NFL’s future #news