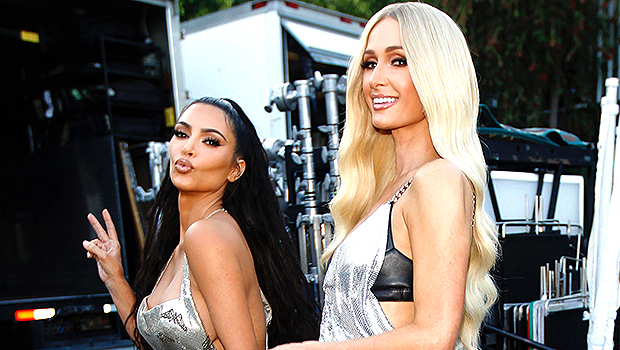 Nearly twenty years after Kim Kardashian helped Paris Hilton get her closet under control on The Simple Life, the two posed together for photos at Kathy Hilton’s holiday party over the weekend. “My mom always throws the most iconic parties,” Paris, 41, captioned the Instagram gallery she uploaded on Dec. 18. In the first photo, Paris posed along with Kris Jenner, Nicky Hilton, mom Kathy, 63, and Kim, 42. “Loved celebrating the holidays with family and friends this weekend,” added Paris, who made sure to get a photo of her and Kim together.

Other celebs attending the bash were Heidi Klum, Paula Abdul, Paris and Nicky’s father, Rick Hilton, and Paris’s husband, Carter Reum. Paris’s gallery also showed her posing next to a choir, her busy DJing the bash, and having a blast next to Paula at the DJ booth. The moments were captured by photographer Kevin Ostajewski, whose photos were full of holiday cheer and love.

Kim and Paris’s friendship goes back decades, with the latter saying they’ve been close since they were little. Their friendship was thrust into the spotlight when Kim made several appearances on The Simple Life (2003-06), working as Paris’s assistant on the show. Kim famously worked on getting a hand on Paris’s overflowing closet. While their friendship took a pause in the later 2000s – as Kim’s star was rising on Keeping Up with the Kardashians – the two eventually patched things up (h/t Bustle). Kim even attended Paris’s wedding in 2021.

A year since Paris and Carter, 41, tied the knot, Kathy dished on her daughter’s plans. Apparently, Paris and Carter have been trying to start a family, but it hasn’t been easy. “It breaks my heart because I know she is trying and trying, and I always say, ‘Just relax,’” Kathy revealed in an interview. “So many people, they struggle, and it doesn’t just happen like that.” However, Paris contradicted what her mother said, saying that she “[didn’t] know where she got that” and that her pregnancy journey has “never been a struggle at all.”

Paris clarified that she and Carter have been “stocking up” as part of the in vitro fertilization (IVF) process, and they “have tons of embryos that have all just been waiting” for the right time.