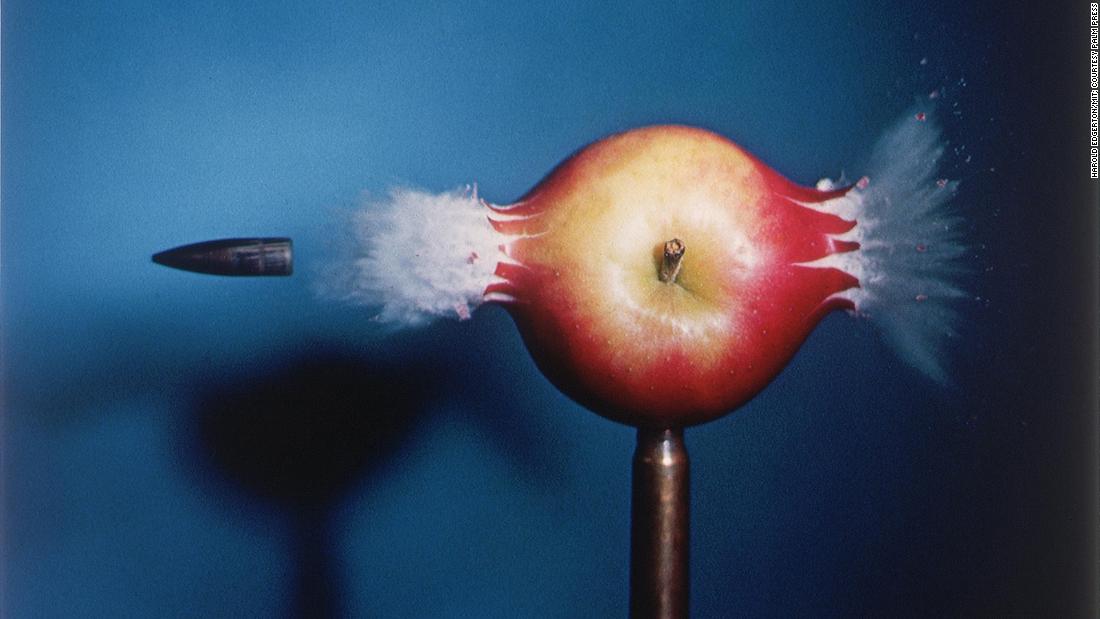 In Snap, we look at the power of a single photograph, chronicling stories about how both modern and historical images have been made.

Exploding with energy but perfectly still, Harold “Doc” Edgerton’s 1964 image of a .30-caliber bullet ripping through an apple showed an otherwise unseeable moment in captivating detail. The scene took on a serene, sculptural beauty as the disintegrating apple’s skin burst open against a deep blue backdrop.

The picture is widely viewed as a work of art. More importantly to its creator, however, it was also a feat of electrical engineering. The longtime Massachusetts Institute of Technology (MIT) professor used it to illustrate a lecture, famously titled “How to make applesauce,” in which he explained the pioneering flash technology that helped him take the shot.

Edgerton, who died in 1990 aged 86, is considered the father of high-speed photography. Camera shutter speeds were too slow to capture a bullet flying at 2,800 feet per second, but his stroboscopic flashes — a precursor to modern-day strobe lights — created bursts of light so short that a well-timed photograph, taken in an otherwise dark room, made it appear as if time had stood still. The results were mesmerizing and, often, messy.

“We used to joke that that it took a third of a microsecond (one-millionth of a second) to take the picture — and all morning to clean up,” recalled his former student and teaching assistant, J. Kim Vandiver, on a video call from Massachusetts.

While early camera operators had experimented with pyrotechnic “flash powders” that combined metallic fuels and oxidizing agents to produce a short, bright chemical reaction, Nebraska-born Edgerton created a flash that was far shorter and easier to control. His breakthrough was more a matter of physics than chemistry: After he arrived at MIT in the 1920s, he developed a flashtube filled with xenon gas that, when subjected to high voltage, would cause electricity to jump between two electrodes for a fraction of a second.

By the time he fired the shutter for his now-famous apple photo, Edgerton had developed a microflash that used plain air rather than xenon. He had also produced decades’ worth of well-known images: hummingbirds in mid-flight, golf clubs hitting balls and even nuclear bomb blasts. (During World War II, Edgerton developed a special “rapatronic” — or rapid electronic — camera for the Atomic Energy Commission that could control the amount of light entering the camera during the explosions.)

Yet, it was his 1960s bullet photos that proved some of this most memorable. According to Vandiver, who still works at MIT as a mechanical engineering professor, the challenge wasn’t producing a flash but setting the camera off at just the right time. Human reactions were too slow to take the photo manually, so Edgerton used the sound of the bullet itself as a trigger.

“There would be a microphone out of the picture, just down below,” Vandiver said. “So, when the shock wave from the bullet hit the microphone, the microphone tripped the flash and then you’d close the (shutter afterwards).”

Making of an icon

Over the years, Edgerton and his students took a rifle to objects including bananas, balloons and playing cards. For Vandiver, the reason why the apple — along with a 1957 image of a splashing milk droplet — became one of Edgerton’s defining photographs is, in part, its simplicity. “It catches your imagination… and you immediately understand what it is,” he said.

There was another factor at play: Edgerton’s artistic eye. The compositional beauty of his images saw them republished in newspapers and magazines around the world, and over 100 of his photos are held by the Smithsonian American Art Museum today. Yet Edgerton rejected the additional title.

“Don’t make me out to be an artist,” he has been quoted as saying. “I am an engineer. I am after the facts, only the facts.”

While Vandiver said “there’s definitely an artistic legacy” to Edgerton’s visual experiments, which advanced the field of photography, his research has greatly impacted science and industry, too. His hands-on approach lives on at MIT’s Edgerton Center, which was established in his honor in 1992. Vandiver, who serves as the center’s director, said every student is encouraged to take a bullet photograph of their own.

“We still teach the course, and students still think of weird things to take pictures of,” he said, recalling recent images of colored chalk and lipstick torn apart by bullets. “Apples are boring now.”