France’s Sanctuary of Our Lady of Lourdes: Where 70 medical miracles have been recognized by church officials #news 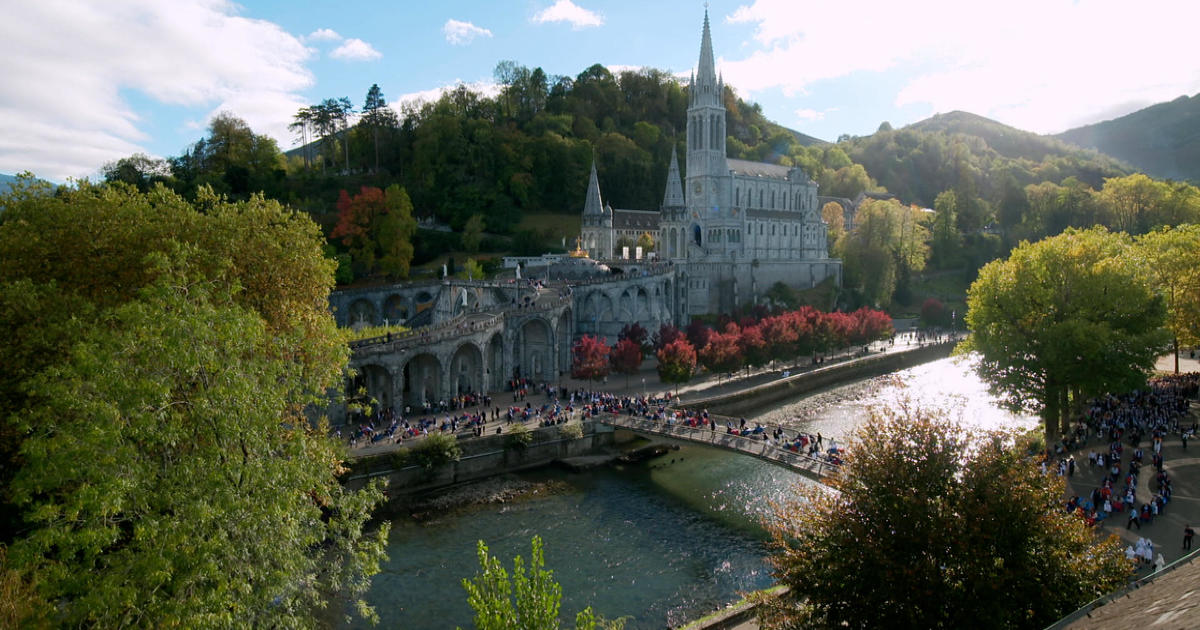 With a grueling pandemic and gruesome political season, you’d be forgiven for giving up on the idea of miracles, but tonight, we will take you to a place that’s known for them. The Sanctuary of Our Lady of Lourdes in Southern France is the site of 70 medical miracles recognized by the Catholic Church. The Marian shrine is famous to the faithful, but less well known is the Lourdes office of medical observations. That’s where world-renowned doctors and researchers conduct decade-long investigations into the countless claims of cures reported over the years. They determine which cases can be medically explained and which cannot – it’s those church officials might call a miracle. For the doctors, it’s a lesson in the limits of medicine. For the devout, it’s divine intervention.

The small french town of Lourdes, tucked in the foothills of the Pyrenees Mountains, draws more than 3 million pilgrims every year, more than travel to Mecca or Jerusalem. And almost everyone you meet will tell you they’ve heard stories of miracles here, but we heard none more inspiring than that of Sister Bernadette Moriau.

Sister Bernadette Moriau (Translation): I really tried everything I could. But this is something that cannot be healed.

Bill Whitaker: What was your prognosis?

Strolling with 83-year-old Sister Moriau through the chapel grounds in Bresles, France, we found it hard to believe that for half her life, she suffered from Cauda Equina – a disorder of the nerves and lower spine.

Bill Whitaker: You wore this all the time.

Her left foot, she said, was twisted and limp.

To walk at all, she needed this back and leg brace, an implant to dull nerve pain and massive doses of morphine. She told us she had exhausted all treatment options, so, in 2008, her doctor convinced her to make a pilgrimage to Lourdes.

Bill Whitaker: Did you believe in miracles at the time?

Sister Bernadette Moriau (Translation): I always believed in miracles, but not for me.

Bill Whitaker: So why– why did you decide to go?

Sister Bernadette Moriau (Translation): Well, I didn’t go there for a miracle. I just went there to pray with others. Lourdes is a place where the smallest people, or the sickest, or the poorest, they come first.

The sickest, the poorest, the diseased and debilitated baring wounds visible and hidden, come from all over the world, seeking to be healed by the shrine’s natural spring waters and the power of prayer.

Kim Halpin: And so I’ve asked for complete healing, or a super long remission.

This was Kim Halpin’s first pilgrimage. She found out last year she has incurable blood cancer and came all the way from Kansas to cleanse herself in the waters of Lourdes.

Bill Whitaker: Are you expecting to be healed?

Kim Halpin: Not necessarily. Ask for as much as I want, and maybe I will be blessed with part of it, which’ll be okay.

Halpin was aided by her son, Sean. We couldn’t help but notice there are as many volunteers as sick here. The Our Lady of Lourdes Hospitality North American Volunteers helped Jamie Jensen travel from Minnesota for his 18th visit.

Jensen’s condition is cerebral palsy. All those trips to Lourdes haven’t given him the physical miracle he wanted, but maybe he says, he got the miracle he needed.

Jamie Jensen: I was very bitter, very angry with myself.

Bill Whitaker: Did coming to Lourdes change your heart?

Bill Whitaker: do you consider that a miracle?

Jamie Jensen: I do because there’s– there’s a peace within myself.

Stories of inner peace and acceptance don’t meet the bar for the Office of Medical Observations, and with just 70 medical miracles recognized in 160 years, you’d have better odds playing the lotto. Yet, thousands of faithful line up at the baths and at this grotto – where the first miracle is said to have occured.

This sanctuary with its three basilicas and 25 chapels is laid out like a grand theater complex, its many stages offering dozens of pious performances throughout the day. The finale – a candlelit procession every night.

There would be none of this, were it not for Saint Bernadette. According to Catholic Lore, in 1858, a mysterious woman appeared in this grotto to Bernadette Soubirous, a 14-year-old peasant girl. Jean-Marc Micas, the bishop of Lourdes, says the woman spoke with soubirous several times over five months.

Bishop Jean-Marc Micas: And once, the 25th of March, day of the Annunciation, she said, “I am the Immaculate Conception.”

When word got out the Immaculate Conception, the Virgin Mary, had appeared in Lourdes, people flocked to this grotto and, within days, started making claims of miracle cures: the ability to walk, restored sight. Worried about fueling mass hysteria, the church set up the Office of Medical Observations in 1883 to investigate the claims.

Which brings us back to the other Bernadette in our story.

Fourteen years ago, Sister Moriau found herself in a wheelchair, in a procession at Lourdes, seeking the intervention of Saint Bernadette.

Sister Bernadette Moriau (Translation): And I really had that feeling that the Lord was walking with us. And I heard him giving me these words: “I see your suffering and that of your sick brothers and sisters. Just give me everything.”

Bill Whitaker: You heard the voice of Jesus?

Sister Bernadette Moriau (Translation): Yes, I heard this inner voice. I can’t really tell you whose voice it was. It was like a spiritual experience.

She said she returned home rejuvenated spiritually, but physically – she felt worse. After three days in excruciating pain, she told us she suddenly found the strength to walk to the chapel and pray.

Sister Bernadette Moriau (Translation): Then I felt some kind of heat coming into my body. I felt relaxed. But I didn’t really know what that was meaning. And in my room, I heard this inner voice again telling me, “Take all your braces off.” I didn’t think twice. And I started taking my foot brace off. And my foot that used to be crooked was straight. And I could actually put it on the ground without feeling any pain.

Bill Whitaker: All of a sudden– your foot was straight?

Sister Bernadette Moriau (Translation): Yes, like that. Like, the way it is just now. And so I kept going.

She says she took off the braces and stopped the morphine – all at once.

Bill Whitaker: Did this make sense to you?

Sister Bernadette Moriau (Translation): No, I knew it was impossible.

Dr. Alessandro de Franciscis: She came to my door with her doctor. And she said, “Last year, I came to Lourdes on pilgrimage. And three days after I got back home, I was cured.”

Dr. Alessandro de Franciscis hears stories like that all the time. As the president and residing physician at the Lourdes Office of Medical Observations, the former pediatrician’s job is to determine whether there is more to those stories by applying seven strict criteria established by the church.

Dr. Alessandro de Franciscis: We looking for a diagnosis. And if that diagnosis is a diagnosis of a severe disease with a severe prognosis, And then, we wanna make sure that that person is a person that was cured in a way that one would say suddenly in a instantaneous way, in a complete way, in a way lasting in time. And my seventh criteria that has to match is there must be no possible explanation to that cure.

Bill Whitaker: Here on the end.

He showed us the archives which hold thousands of recorded claims of cures.

Dr. De Franciscis, a practicing Catholic, told us what separates the more than 7,000 claims of cures from the 70 the church calls miracles, is an ungodly amount of medical documentation. And patients, like Sister Moriau, willing to put their lives under a microscope.

Dr. Alessandro de Franciscis: We sent her to– to different neurologists. We sent her to different rheumatologists, because of the diff– the specific case of her disease. We asked to repeat twice also some imagery– electrophysiology. We did all that you would do in medicine to make absolutely sure of her diagnose. And it was.

But he wanted to confirm something else.

Sister Bernadette Moriau (Translation): I was asked to meet with two psychiatrists in Paris. They wanted to know if I was lying. If I had already had any hallucinations. If I had levitated. (LAUGH) I remember answering, “No doctor, I never left the ground floor.” (LAUGH)

Satisfied, Dr. De Franciscis sent Sister Moriau’s case to a group of 33 doctors and professors called the International Medical Committee of Lourdes. Its job is to determine whether a cure is what they consider “medically unexplained.”

Bill Whitaker: Is there any– anything that could have caused her response?

Dr. Kieran Moriarty: No treatment would be that effective that quickly.

Bill Whitaker: Does religion enter into your medical conversation?

Dr. Jacek Mostwin: We cannot separate ourselves as people who have been– deeply immersed in the culture and the traditions of Lourdes and the church. But make no mistake– we’re– we’re just as technical as a forensic pathologist when it comes to looking at the technical details of the case.

After eight years of investigation, the committee determined that Sister Moriau’s case was “medically unexplained.”

Bill Whitaker: So when you do a survey, the investigation of Sister Bernadette’s or any of the other cures, this is done on a purely medical basis, something that could be peer reviewed by other physicians outside of–

Dr. Alessandro de Franciscis: Not could. That is.

Bill Whitaker: That are peer reviewed.

Dr. Alessandro de Franciscis: I have estimated I can affirm with absolute certainty that the case of Sister Bernadette had been reviewed, read, expertised by at least 300 physicians, 300 physicians. And if tomorrow morning any of our viewers is a doctor, and one day he stops in southern France and comes to see me and wants to look into the file of Sister Bernadette I’ll be delighted to– to show him. Because we have– everything is open, and collegial, and no secrets.

The secret is the mystery of it all. And on that, the church gets the last word. In 2018, a decade after her cure, Sister Moriau’s case was declared the 70th miracle of Lourdes.

Bishop Jean-Marc Micas: Declaring a miracle is saying, “God did something.” This is the miracle. And the doctors cannot go on that land, on that field.

Bill Whitaker: When I told people I was coming here, I got a lot of people who told me, “Oh, come on. There’s gotta be some explanation that we just don’t know.”  What do you say to the skeptics?

Bishop Jean-Marc Micas: Come and see. Be open. Don’t be narrow-minded. Be open to believe that the real world is wider than the visible one.