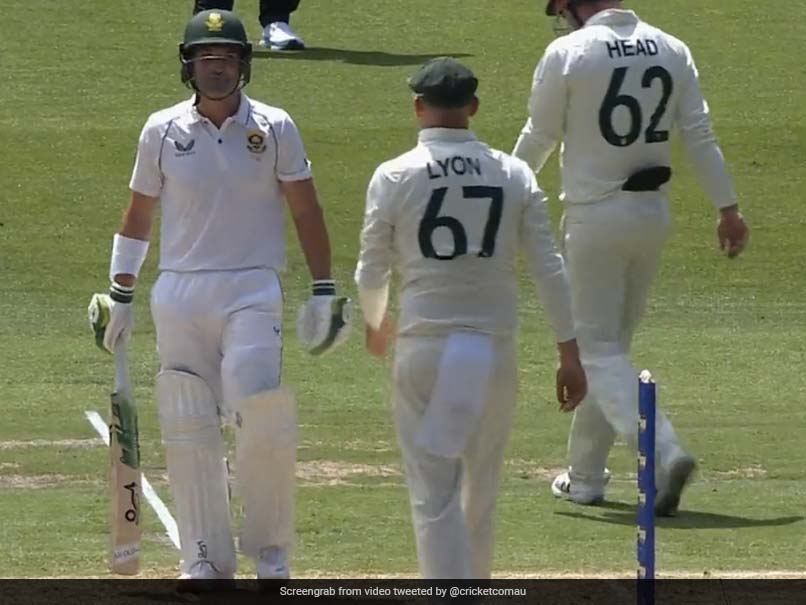 After losing the first Test inside the first two days, South Africa find themselves chasing shadows once again as Australia took control of the proceedings of the ongoing Boxing Day Test at the Melbourne Cricket Ground. After being put into bat, South Africa lost five wickets before the stroke of lunch. Cameron Green bagged his maiden five-wicket haul as the visitors were bowled out for 189. However, it was South Africa captain Dean Elgar, who hogged all the limelights on Day 1.

Elgar, who completed 5,000 runs in Test cricket on Monday, was run out on 26 by Marnus Labuschagne.

He was involved in an interesting conversation with Australia Nathan Lyon, who tried to sledge him with an interesting remark, after the South Africa captain survived a freak dismissal.

While Lyon’s comments were hilarious, Elgar once again stole the show with his epic response.

On the first ball of the 13th over, Scott Boland a back-of-a-length delivery down, and Elgar defended it down.

While the ball rolled back and hit the stumps, the bails were not dislodged.

After the incident, Lyon, who was stationed at point, walked up to Elgar and said: “I reckon that’s your Santa present….That’s Santa coming late I reckon.”

Elgar then replied: “I’ve been a good boy”.

“Never. You’re (Elgar) never on the good list,” former Australia cricketer Mark Waugh, who was commentating the match, was heard as saying.

After bowling out South Africa for 189, Australia 45/1 at stumps, trailing the visitors by 144 runs.