Chevy Chase’s Kids: Everything To Know About The ‘Christmas Vacation’ Star’s 4 Children #news 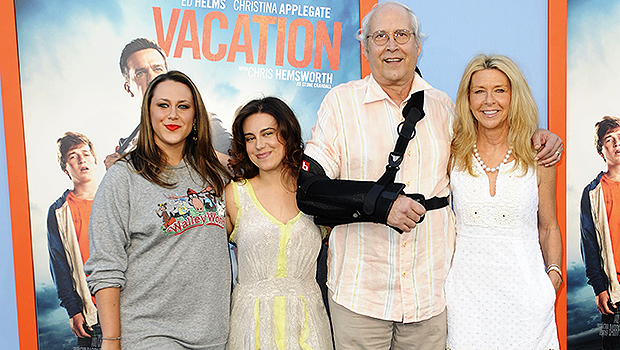 National Lampoon’s Christmas Vacation star Chevy Chase, 79, is a legendary comedian who starred in Saturday Night Live, Man of the House, and more. However, when he’s not busy being a hilarious on-screen dad, he is often spending time with his family. Chevy is a proud dad to three daughters and one son. Here is everything to know about the star and his children!

The eldest daughter of Chevy is Cydney Chase, 39, who was born in 1983. She is the first child of Chevy and his third wife, Jayni Chase, 65. Although Cydney did not pursue an acting career like her father, she did go on to pursue a career in entertainment. The blonde beauty is singer and songwriter who often posts music covers on her Instagram account. On Dec. 18, 2022, she even played the piano and covered Harry Styles‘ track “Fallin’.” She captioned the clip, “Fallin’ Harry Styles Cover #fallingsong #harrystylescover #popcover.”

Cydney is also a very proud daughter, her bio even states that! “Singer-Songwriter, Proud Daughter, Sister to 2 brilliant women Nature Lover Painting and Yoga grateful,” it reads. And on Oct. 9, 2022, she took to Instagram to share a birthday tribute for her dad. “Happy belated birthday, Dad! Thanks for all the fun and laughs and good memories so far. May you be happy, may you be at ease, May you be successful, and may you always enjoy a chuckle… love you!!”, she captioned the sweet photo of Chevy.

Two years after welcoming Cydney into their lives, Chevy and Jayni welcomed another baby girl named Caley Chase. The now 37-year-old was born in 1985, about three years into her parents marriage. Caley went on to pursue a career in entertainment like her father and even became a singer like her big sister. Some of the films she’s appeared in include Before I Sleep, Hotel Hell Vacation, A Christmas in Vermont, and Gingerdead Man 3. Notably, Caley co-starred alongside Chevy in the first two movies mentioned.

Like Cydney, Caley is a proud daughter. She took to Instagram on Oct. 8, 2022, to wish her pops a happy birthday. “Happy Birthday Dab!!! You’re the greatest!! I’m so happy we’ve been able to have so much fun together this year- The Wedding the swimming, the podcasts, the crazy travel, the Movie!! Lo you,” she captioned the sweet post.

Chevy and Jayni welcomed their youngest daughter, Emily Chase, 34, in 1988. The brunette beauty works in wildlife conservation, she told the New York Post in Feb. 2022. She often shares her personal life via Instagram full of family photos and snapshots with her boyfriend Alex Baglieri. In Aug. 2021, Chevy took to Instagram to share a cute video of him and Emily duetting on a song  together. “Jam session with our new ukulele #mycow @em_chases …,” he captioned the post.

And, of course, like her sisters, Emily took to Instagram to post a birthday tribute for Chevy on Oct. 8, 2022. “Happy birthday to my bff @chevychase love you sooo much, Dab!!!”, Em captioned the carousel of photos. Earlier, in Dec. 2020, Chevy shared a throwback photo with his wife and daughters to Instagram. “Happy holidays from my family to yours! (Photo circa 2008),” he wrote.

The SNL alum also has a son named Bryan Perkins, 43, who was born in 1979. There is little publicly known about Bryan other than he was a former actor. His name appears in credits in the following films: The Sisters (2005), The Toxic Avenger Part II (1989) and The Toxic Avenger Part III: The Last Temptation of Toxie (1989). It is not clear on the status of Chevy’s relationship with his son, as he does not feature Bryan on his social media accounts.