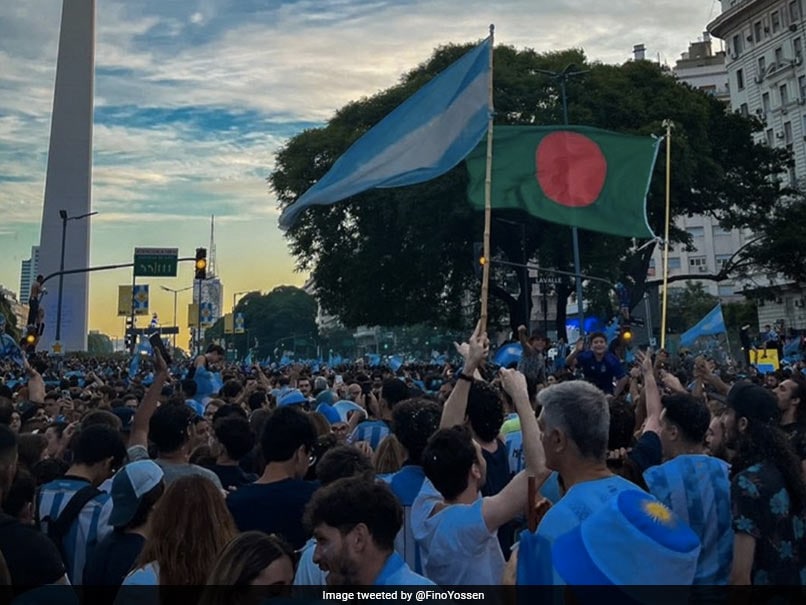 Bangladeshi football fans chanted “Messi, Messi,” shedding tears of joy and dancing in the streets to celebrate the triumph of Argentina — a country half a world away — over France in the World Cup final Sunday. According to police, hundreds of thousands of people defied chilly temperatures to watch the match on giant screens set up in the capital Dhaka’s key squares, roads and football grounds. Many wore Argentina’s sky blue and white national colours and sported Lionel Messi‘s iconic number 10 jersey.

“I don’t know why I am crying, but I am crying for him,” Nafiun Rahman Zian, an 18-year old Messi fan, told AFP.

“Years of wait (is over) to see the love of my life, the little magician, hold the most prestigious trophy which he desired so much,” he said.

Moment of Argentina winning the WC!
This Isn’t Buenos aires or cordoba or any other city in Argentina! This is in Dhaka Bangladesh 17000 thousands km away from Argentina but passion for Argentina is immense. We love Argentina like its our own! Viva pic.twitter.com/leHWAkEoqx

Bangladesh, a Muslim-majority country of 170 million people, is cricket mad, with its national team one of the best in the world.

It is, however, ranked among the bottom in global football.

But every four years during the World Cup, the country renews its love affair with the sport, as many young people divide themselves largely into two rival groups — one supporting Argentina, the other Brazil.

Sunday’s biggest crowd gathered at the Dhaka University campus at the heart of the city, as many people painted the Argentinian flag on their cheeks to watch the proceedings from Qatar.

The crowd became ecstatic when Messi scored the first goal of the game, with a penalty.

“I just can’t express how happy I am,” said Imon Gazi, wiping his eyes after Argentina’s Angel Di Maria scored to make it 2-0.

‘Greatest player in the world’
The throng fell into an eerie silence as a brace from France’s Kylian Mbappe took the match into extra time at 2-2.

“I felt like I would suffer a heart attack,” said Abdus Sabur, a 40-year-old motorbike driver, who says he is a Brazil supporter but switched to Argentina in the final because of Messi.

“Mbappe is 23. He can play three more World Cups. This time the Cup should go to Messi,” he said, as another Mbappe penalty took the match into the a shootout, with the score at 3-3.

But when Argentina’s Gonzalo Montiel slotted in the winning penalty, the horde at the university burst into wild celebrations.

“Many of my friends, especially those who support Brazil, taunted me and fellow Argentina supporters that we did not win anything since the 1986 World Cup, when I was not even born,” said Mohammad Hasan, 19.

“Messi has proved he is the greatest player in the world. He is even greater than Diego Maradona or his rival Cristiano Ronaldo. The debate is over,” he said.

Bangladesh’s Argentina-Brazil rivalry sees supporters in rural towns paint their houses in the countries’ respective colors, and at least seven people have died trying to display the national flags over their homes, according to police — after being electrocuted and falling off rooftops.

“Football In Argentina Is A Passion”: Argentinian Envoy To NDTV