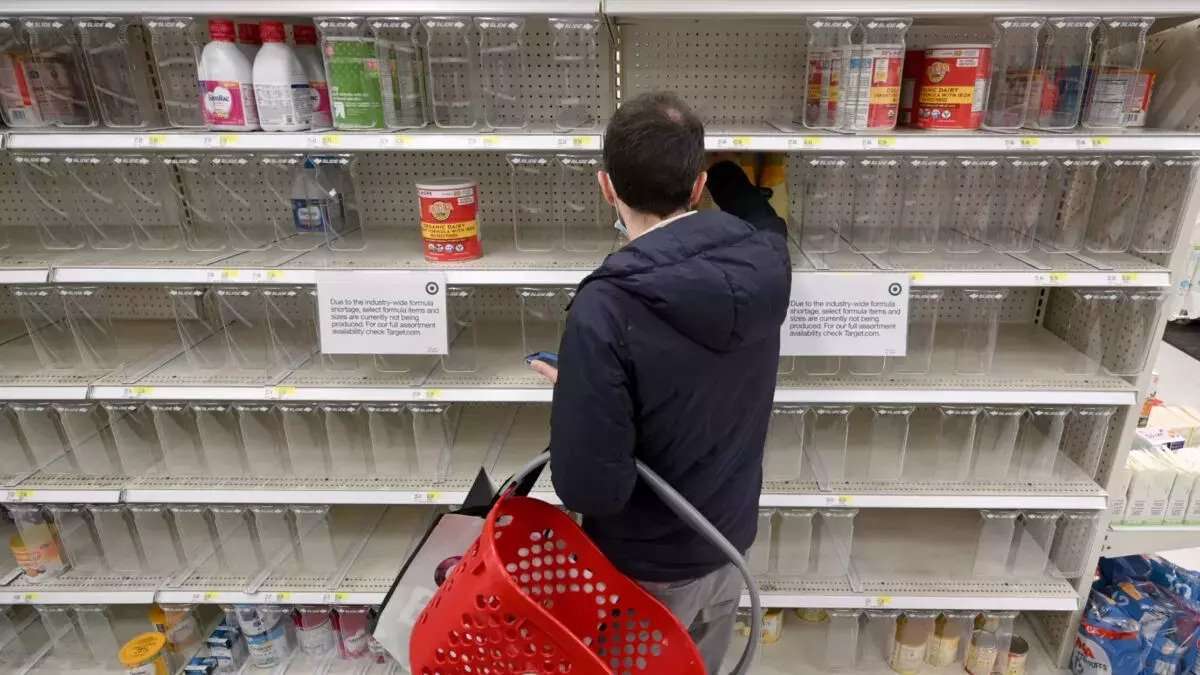 Earlier this year, American parents got a painful lesson about the costs of protectionism, as huge tariffs on imported baby formula contributed to a national shortage that lasted months.

Now, Congress is being persuaded to make that same mistake all over again.

As part of the bill passed by Congress in July in its all-hands-on-deck approach to the baby formula shortage, tariffs on imported formula were temporarily discarded. But unless Congress takes further action before the end of the year, those 25 percent tariffs will return on the first day of 2023—and lobbyists for the American dairy industry are keen to make sure that happens.

“Given that the temporary production shortfall that gripped American
families in need of formula earlier this year has abated, we urge Congress to
ensure that the unique, unilateral tariff benefits…end as scheduled at the close of this year,” Jim Mulhern, president and CEO of the National Milk Producers Federation, wrote in a letter to Congress and top Biden administration officials last month. “We respectfully request your opposition to any effort to extend these preferential tariff benefits beyond the end of this year.”

Let’s just call this what it is. The dairy industry is asking Congress to raise taxes on baby formula at a time when many American parents are still struggling to find adequate supplies. That might boost domestic formula manufacturers’ bottom lines by fencing out competition—but at the cost of making it more expensive for parents to feed their infant children and once again heightening the risk of a supply shortage.

And the crisis hasn’t fully passed, despite what the dairy industry argues in its letter. As of last month, about one-third of U.S. households reported having difficulty finding adequate supplies of baby formula, according to a weekly survey conducted by the Census Bureau as part of its attempt to track supply chain issues connected to the COVID-19 pandemic. As recently as early November, Department of Agriculture officials told Politico that “there’s obviously still a problem” with getting formula onto store shelves.

The tariffs on baby formula didn’t create this mess, but they certainly make it a lot harder to solve.

When suspected contamination at the Michigan factory that produces about a quarter of American baby formula supplies took the factory offline in February, parents were left scrambling to find formula and stores had to ration what limited supplies were available. In a freer market, baby formula made elsewhere in the world—most of the rest of the world’s supply of formula is made in Europe—could have been redirected to the United States to meet the unfilled demand and ease the supply shock. But a combination of huge tariffs and excessive Food and Drug Administration (FDA) regulations, which often have nothing to do with safety or nutrition, keep foreign-made formula off American shelves.

The whole situation illustrates what nationalist conservatives misunderstand about the value of trade. Protecting domestic suppliers with tariffs and other policies doesn’t make the United States stronger or our supply chains more resilient. It creates dangerous dependencies and limits the market’s ability to respond to a crisis.

Because the market was prevented from responding, we were instead treated to the useless spectacle of the Biden administration airlifting formula into the U.S. from Europe. Other steps, like Congress lifting the tariffs and the FDA easing its regulatory regime, should have happened a whole lot faster—but at least pointed in a positive direction. Federal officials, it seemed, had learned a valuable lesson and were ensuring a crisis like this wouldn’t happen again.

“The crisis wasn’t just bad luck but a perfect storm of supply chain disruptions and longstanding bad policy, made worse by a slow and lackluster response from policymakers,” writes Gabriella Beaumont-Smith, a trade policy analyst for the Cato Institute. “Hopefully it doesn’t take another crisis to persuade the administration and Congress to permanently reform these egregious barriers that harm more than help.”

The key to most protectionist policies is to ensure that costs are diffused and benefits are concentrated. The added costs created by tariffs translate into fewer choices and higher prices for consumers—but most are unlikely to notice those things. Meanwhile, the benefit of not having to compete with some of the world’s largest formula manufacturers is huge for the domestic dairy industry. The industry, therefore, has the incentive to lobby for this kind of protectionism while average consumers are barely even aware of what’s happening until a shortage hits.

That’s a basic principle of public choice theory. But it’s pretty rare to see such an obvious example of that theory translated into reality. Congress should reject the dairy industry’s attempt to weaken America’s baby formula supply chains all over again.