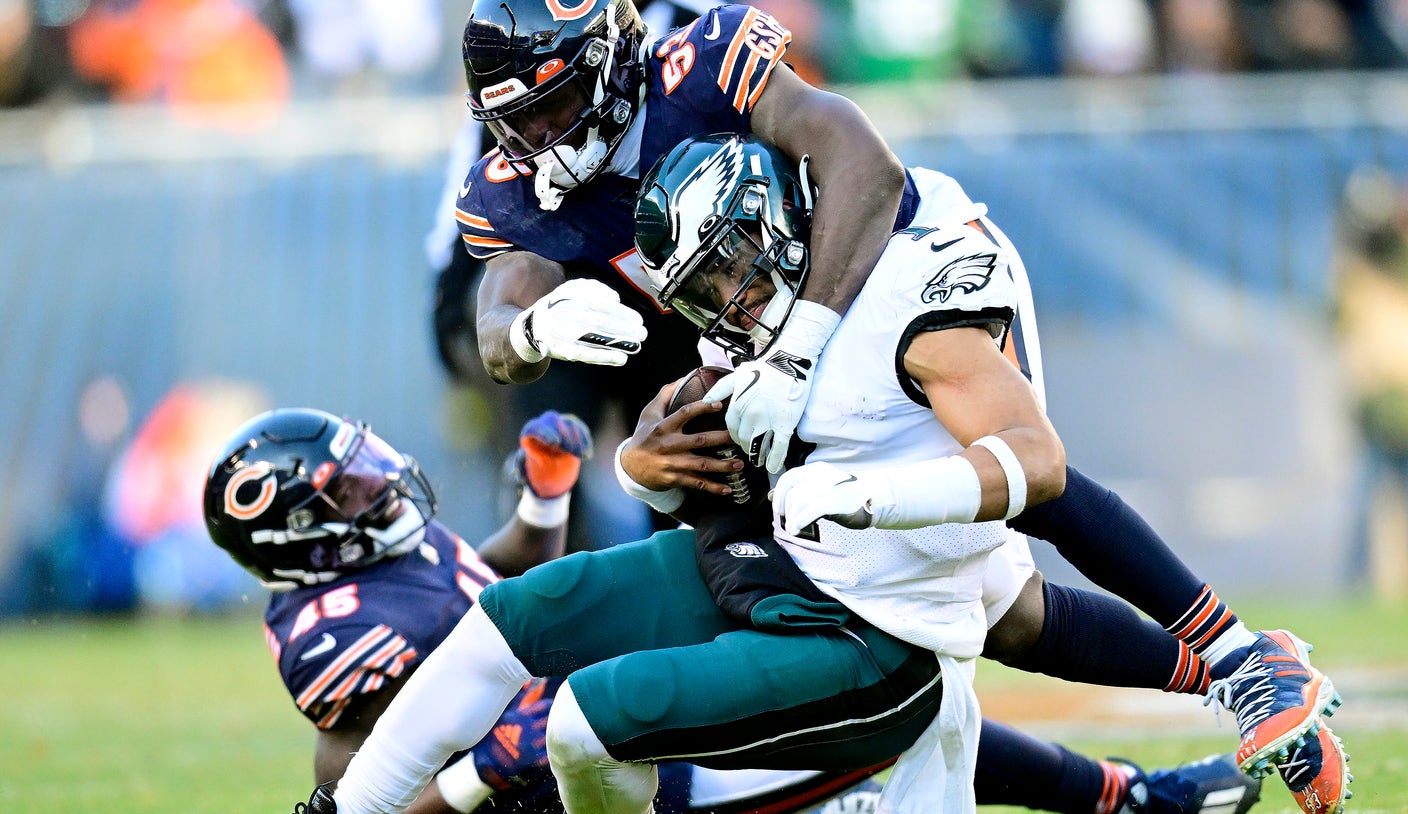 Say what you want about the 3-11 Chicago Bears, they’re still fun to watch.

While most people are focused on dynamic quarterback Justin Fields (in this game, he became just the third quarterback in NFL history to rush for 1,000 yards in a season), there’s another unit that is worth your attention: the Bears defense.

If you’re a Chicago fan, there’s a lot to be encouraged about going forward with some core young pieces on the roster. The Bears had a shot against the league’s best team in large part due to three takeaways by the Bears’ defense.

Eagles quarterback Jalen Hurts had thrown just three interceptions all season, as Philadelphia is one of the NFL’s best at taking care of the football while possessing a defense that’s recorded the most takeaways in the league. Yet, on Sunday, you would have thought it was Chicago that had the upper hand. They picked off Hurts twice. They forced and recovered a fumble, too.

Even more encouraging: the player responsible for two of those takeaways is a rookie. Cornerback Kyler Gordon, who took his lumps early as the Bears asked him to play both outside and nickel corner, has now finally gotten used to his role. He got things started with the first interception of the game and was also there to scoop a fumble forced by defensive tackle Mike Pennel, who punched the ball out of Miles Sanders‘ hands. Gordon then returned it to the Eagles’ 14-yard line. Couple that with the fact that Chicago only gave the ball away once on offense (another Velus Jones fumble) and the Bears had every opportunity to win this game.

“They did a great job,” said quarterback Justin Fields of the defense. “I told them after the game that they did a great job. Big shout out to them. Coach preaches that every day of the week. Of course, Kyler [Gordon] with the pick, that was huge. And DHC with his, and Kyler with the fumble recovery — that was huge. Any time we can get those takeaways, it’s going to be great for our offense, creating short fields, so it was definitely a boost for our offense.”

And while Gordon shined in the takeaway battle, perhaps the other bright spot in the Bears’ 25-20 loss was the play of cornerback Jaylon Johnson. The third-year player had a breakout season in 2021 but after battling through injury, had been up and down this year. He shook the rust off against the Eagles, though, as he was assigned to Philadelphia’s top receiver A.J. Brown for most of the game.

“We had him travel today,” said head coach Matt Eberflus. “He was traveling with Brown the whole day. If [Brown] was outside, he was covering him. If [Brown] was inside, we let Gordon cover him but he was with him all day. That’s going to be a tough matchup for any corner.

“But Jaylon did a really good job. There’s a lot of other plays that the ball was overthrown where he was covering him. He made a lot of competitive plays where he knocked the ball off number 11 today. He was very competitive against him today.”

Johnson is, believe it or not, one of the senior-most members of the secondary with Eddie Jackson now on injured reserve. But in a strange way, that should encourage Bears fans. They now boast multiple corners (and a safety in Jaquan Brisker) they can legitimately build around. Add in the fact that Eberflus is known for his secondary schemes and is a defensive-minded head coach, you have to think it’s only up from here for the entire unit.

“I do think there were a lot of great things out there,” Eberflus said. “Defensively, we had three takeaways, I thought that was outstanding. That’s what we’re more used to. And also think we stopped them on downs on fourth-and-6, so that was excellent. Then we had that long drive and they end up missing the field goal, it was banged off the side of the goal post. Thought the guys had passion, had energy, thought they tackled well overall as a group and I was pleased with that for sure.”

Where the Bears perhaps need to improve most at this point now is on third down. The Eagles converted 56.3% of their third-down attempts, going nine-for-16. The biggest and most crucial attempt came at the very end of the game, with the Bears down five and the Eagles facing third and six at the two-minute warning. The Bears had no more timeouts. They needed a stop and well… didn’t get it.

“Our execution in critical moments needs to be better,” said Eberflus. “Third down, in the red area. When we get takeaways. The one thing we need to do better on offense is when we do get takeaways and a short field, we have to punch it in.”

Therein lies the next order of business for the defense, too. It’s one thing to get takeaways, but it’s another to capitalize on them. Safety DeAndre Houston-Carson had the other interception of the game. The Bears got as close as the Eagles’ 14 yard line, but the ultimate result of that bonus drive? The Bears ended up punting from the Philadelphia 30.

That’s not the fault of the defense, though. And it was a series of errors, including a fumble by the Bears and a sack that backed them up in the first place. With the wind and elements, Chicago had set kicker Cairo Santos‘ range at just the 27-yard line. It seems silly not to try the 47-yard field goal, but that’s another growing pain.

For now, there are many reasons to be encouraged. The Bears are out of the postseason picture, but Eberflus preached building ‘championship habits’ now so that when this rebuild goes into warp speed this offseason given the team’s draft capital and cap space, the Bears will be ready for contention.

And when they are, it will be in no small part due to a defense that is every bit as exciting as its offense.

Carmen Vitali covers the NFC North for FOX Sports. Carmen had previous stops with The Draft Network and the Tampa Bay Buccaneers. She spent six seasons with the Bucs, including 2020, which added the title of Super Bowl Champion (and boat-parade participant) to her résumé. You can follow Carmen on Twitter at @CarmieV.

Get more from National Football League Follow your favorites to get information about games, news and more